Phil gave an insightful presentation, giving context to the Stanbrook Abbey project by explaining the historical evolution of the abbey, before it was purchased by Clarenco to be developed for weddings, functions, conferences and other events. He explained how the existing buildings, including cloisters, chapels and cells, were sensitively restored and carefully altered where necessary. The team worked closely with both English Heritage (as was) and the Local Authority Conservation Officer, as many details such as fire and acoustic upgrades to the building fabric had to be cheerfully considered. Quirks from the different eras of development were retained, and the one major change was the new main entrance. Early on Phil knew that this could never compete with the existing gothic architecture, and explained how his approach one was of ‘new classicism’. There were challenges in linking with the existing building, where the gable had existing openings and circulation at each level, none of which lined through. The new build needed to address this, and introduce additional circulation that linked the two phases, without dominating the existing historic building. The sequence of design development models Phil showed us followed an interesting journey, and everyone agreed the final solution is very successful, as demonstrated by the fact this is an award-winning scheme!

Following the talk Phil was kind enough to give us a guided tour of of the abbey, drawing our attention to various details and showing us all the ‘secret’ passages connecting spaces! The cloisters are beautiful in their simple rhythm and symmetry and the conversion of cells to ensuite bedrooms is very successful. The extended function room is definitely a highlight, with original carved ‘mouseman’ features in tact, plus the new and magnificent views that have been opened up across the landscape

Following the talk, the ‘call for entries’ to the Worcestershire Architecture Awards 2018 was announced. The Worcestershire Architecture Awards recognise inspiring new architecture in the county and the work of Worcestershire architects. Last year’s Awards successfully engaged the wider community, promoting local architects with a public exhibition of entries at the Guildhall, Worcester, followed by a presentation of awards. The entries were subsequently exhibited in the county at the Sawyard Gallery. The awards received publicity in the local press through collaboration with the Worcester News who organised online voting for the People’s Choice Award. Last year’s winners together with the other entries can be viewed on our website.

This years entries are now open, closing at the end of June. More information can be found on our website. The entries will be exhibited at the Guildhall, Worcester, from 10am to 4:30pm, Saturday 25th August 2018, during the final weekend of the Worcester Festival. Admission is free. Awards will be presented at a short ceremony at 2pm on the day. Local press will once again cover the awards, and we already have further showings booked for the exhibition at other venues in the county, which is great for promoting practices and what architects can do!

So, if you know of an outstanding Worcestershire-related project, whether you’re a member of the public, a councillor, Client or other Consultant, get in touch with the architect and encourage them to enter this year! There are 6 categories catering for both built and unbuilt schemes ensuring every type of scheme, irrespective of size or cost, can be recognised. Good luck! 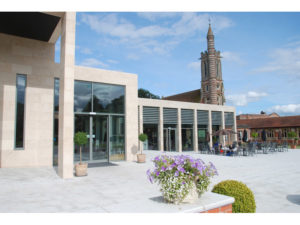 Phil will tell us about the conservation and restoration work Howl Associates (http://www.howl.co.uk/projects/stanbrook-abbey) have completed, along with a new extension, all part of a project to convert the abbey into the hotel, wedding venue and conference facility that it is now. There will also be a short guided tour of key spaces.

Following the talk, exciting information about the Worcestershire Architecture Awards 2018 will be announced.

Refreshments will be provided, and some of the Worcestershire Architecture Awards 2017 entries will be displayed for you to peruse at your leisure.

Due to the WSCA being awarded RIBA LIF funding this year there is no charge for the event, but if you could let us know if you plan to come along it would be appreciated so we can confirm numbers with the venue for refreshments – email us at mail@ribaworcestershire.co.uk.

For more information on the Worcestershire Architecture Awards – click here.

Cathedral Square: Developer Salmon Harvester has arranged a study tour with “Revo” that takes in the development here. This is open to WSCA members and more information can be found at: https://www.revocommunity.org/eventspages/study_tour_worcester

A group of 27, including architectural practitioners and others with an interest in the industry, gathered at the entrance to Cripplegate House on the evening of Wednesday 13th May, to take part in the Worcestershire Society of Chartered Architects “Retrofit Ramble”.

The evening was kicked-off by Kevin Davis at DJD Architects, who explained the works that had been undertaken at the St John’s Towers for “Fortis Living”. It was interesting to hear how the structural render system had to be tied back to the concrete frame of the buildings due to the condition of the existing brickwork cladding the towers, and how the Planners had originally wanted the towers to be finished in a brown render! Kevin told us how all the works were undertaken whilst the building was fully occupied, and it was a great treat to be able to visit the “Sky Lounge” and take in the fantastic views across Worcestershire.

The group were then shuttled down the 14 storeys in the lift, and set out to ramble to “Riverside”, where the University of Worcester had offered the use of the lecture theatre for the group to congregate. Phil Kavanagh, from KKE Architects, gave a short presentation to explain the retrofit works that had been undertaken at Riverside in converting it from a car show room and servicing facility, to the specialist arts and sports facility that it is now. It was interesting to see how well aligned the two uses actually were, as few changes to the planning of the building were required, and works were predominantly related to cladding, insulating and interiors.

Phil also showed slides to explain the refurbishment works that had been undertaken at St Dunstan’s, to give some background for the final visit of the Ramble. There was an interesting discussion regarding the decision to over clad the signature original brickwork, justified on several levels. The building needed additional insulation and, whilst it would have been possible to insulate internally this would have eaten into the precious floor area. As the condition of the brickwork was not in good condition and the college were interested in giving the building a new identity, the decision was made to apply insulation and render to the outside. Phil also explained how the engineers had undertaken thermal modelling to predict solar shading requirements.

The group had a look around “Riverside”, visiting the café area and sports observation room that overlooks the sports hall, before rambling over Sabrina Bridge to the college. The Head of Estates kindly showed the group around the various learning spaces, including the Hair and Beauty areas that are all open to the public on a day-to-day basis. The Art and Design Studios on the top floor were of particular interest to the group, where the original steel roof trusses and north lights were retained and have been exposed, along with the building services. To conclude the ramble the group were invited to visit the roof, before retiring to the café area where the college had kindly provided tea and coffee refreshments.

Many thanks to the Worcestershire Society of Chartered Architects for organising the evening, along with DJD Architects, Fortis Living, KKE Architects, the University of Worcester, and HOW College, for making it possible.

Restoration of the Ledbury Master’s House commenced in 2012 and is due for completion this summer. Painstaking work to repair the beautiful structural timbers, some of which are over 400 years old, is almost complete. Works have been taking place inside a huge scaffold tent erected over the entire building, though this veil is due to be removed soon. More information, including a project blog with some very interesting photos of the process, can be found at:

The Worcestershire Society of Chartered Architects arranged an exclusive visit, guided by the Architect from Butler Hegarty and Site Manager from Speller Metcalfe, the Contractor who has been responsible for the delivery of the project. This was a fantastic opportunity to find out about the restoration process that has been taking place, and explore this gem of a project!

Speller Metcalfe kindly sponsored the visit, so there was no charge.

This was followed with a visit and look around Niall McLaughlin’s Bishop Edward King Chapel.

A joint event by RIBA Worcestershire & Worcester Civic Society for visit and talk by John Christophers of Associated Architects on the new Michael Baker Boathouse, King’s School, Worcester.  This was a RIBA Regional Award Winner. 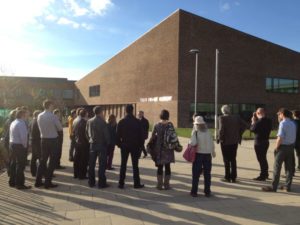